Through networking sessions, presentations and an exhibition the two WaSeaBi representatives, Iben Bang- Berthelsen and Charlotte Jacobsen from DTU Food captured the attention of many participants during BBI JU Projects Day and Stakeholder Forum, which took place from 3-4 December.

BBI JU Projects Day
On 3 December over 250 people participated in the BBI JU Projects Day and a total of 101 projects were present. As the name indicates, the event gathered all the BBI JU projects and was a great opportunity for WaSeaBi to give people within the same field a better understanding of what we are trying to accomplish in WaSeaBi both in terms of objectives and outcomes.

The aim of the event was to learn more about the other BBI projects, networking, get inspired by the other projects and thereby come up with new solutions and ideas within the bioeconomy.

During the event several parallel sessions took place, including an Aquatic Biomass session, where Charlotte Jacobsen presented WaSeaBi. At this session, all the aquatic biomass projects gave a 5-minute presentation of their projects followed by questions from the audience. In relation to WaSeaBi, the audience were particularly interested in learning more about how WaSeaBi will develop tools for supporting decisions for valorisation of side-streams.

The purpose of this event is to give BBI’s stakeholders an insight into what is happening in the bio-based area, what the challenges and opportunities are and how BBI and its projects have contributed to setting the scene for bio-based solutions in Europe.

“It was very interesting and inspiring to hear about some of the great achievements other projects have made, which hopefully can lead to new biobased products on the market and which can reduce waste of biobased raw materials and in some cases also lead to a reduction in the use of fuel based products such as plastic. It was clear from the presentations that the EU commission and the Biobased Industries Consortium (BIC) has high ambitions for Europe in this field. It was emphasized several times that the BBI programme already is a success as it has contributed to structuring the European R&D agenda by making it possible for more than 1200 partners from all over Europe to create projects around Biobased Industries. 40 % of the participating companies/organizations are SMEs”, says Charlotte Jacobsen 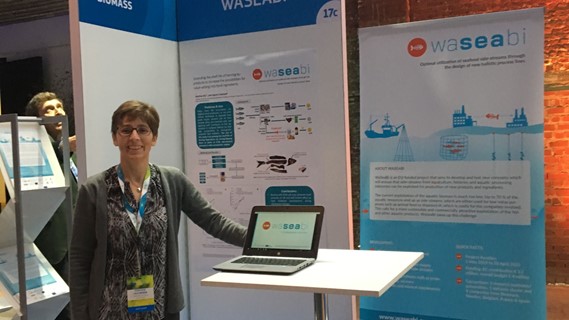 During both days WaSeaBi was exhibited at a stand where Charlotte Jacobsen and Iben Bang-Berthelsen were ready to explain, discuss and answer questions about the project during coffee and lunch breaks.

“We had great discussions with the participants from other aquatic projects but also from the general audience, who showed a general interest in utilizing side-streams in a bio-based context”, Iben Bang- Berthelsen concluded.